Context: this exchange concerns mainly a person recently arrived in the group to whom the meeting was one of the first. The sharings of this person are marked with G. at the start line.

How was this meeting for you?

G. It helped me understand certain things like the concept of body consciousness. And also to see some connections and receive some new information. It also puts me in touch with a kind of autistic reaction that happens to me when I face some situations. As it comes up I am forced to question it. I got only a partial understanding of so much of what has been talked about. Despite the different ways of some people have explained the same ideas, I know that even though I heard it, I have not always understood.

If you don’t understand everything, it doesn’t matter. The teacher asked me to make an existential decision several times over the last three years, and I didn’t understand what he was talking about until this morning. Remain committed and simply accept that not understanding everything and not knowing what is happening is a part of the necessary suffering.

I’d like to add that for the next time, you must prepare yourself to question your beliefs. Not understanding is not a problem. Others are like that, but they are ready to be upset. Because this teaching is not in the mind. Sometimes we can understand years later, but to move forward, it takes stripping the unnecessary parts of oneself.
And even if you have already suffered a lot, it’s not the same kind of suffering that we talk about here.

I liked your sincerity when you just said that you had not figured it all out. At least then, I felt your authenticity. However, I invite you to question the idea that you are stuck on the vocabulary, like the definition of body consciousness. It took me ten to fifteen years to understand. We didn’t talk much of it at first, however, I thought I understood what it was. But each time, I realized the following time that it was something else.

Take the whole business of body consciousness as something that will become clearer and more refined over time. So I invite you to always stay open to the “I don’t know” and avoid the mind’s desire to try to hurry and fix the feeling of “I don’t know” with some definition or concept.

It’s is not a matter of vocabulary. The vocabulary is only a tool to help us discuss and talk about the same things. But if you take this vocabulary and fit it onto what you already know, then it’s fucked.

For example, you said at some point: “Yes, I understand, body consciousness, it is the soul.” If I were you, I would not have said this. I would have said: “Ah! OK! there is something here called body consciousness.” It is only later that you will see if it’s the same as what you call soul or not.

It is useless to replace a new expression with an expression that you already know. You can make the assumption that you know only 4% of what is being discussed here. And even if the soul were the same as body consciousness, then probably, you only know 4% of the soul. But the best approach is to put aside what you think you understand, and go towards that which you have not understood. It’s like that here. When you come here, as everyone else here does, welcome the fact that you know very little about real life. If you want to grow, we must assume that you know virtually nothing.

It refers to the Zen story that you all know: a disciple come to see his master and the master serves him some tea. While the cup is already full, the master continues to pour and the tea overflows. To receive a transmission, one must be open and empty. If you’re too full of all your ideas, all your readings, all the meetings you have already made in a busy life, it is not possible. The trap is to compare what you already know to what you want to know.
I know that I used to read a lot, but since I started here, I hardly read. Maybe one day it will come back.
This is why in Feldenkrais, we develop many strategies so that the body can no longer hold on to what it already knows.

It was a very important opening in my life, when I realized I wasn’t being asked to invalidate what I felt. Whatever feelings arose understood that I didn’t have to approve or reject them. With this understanding, there is no comparison, but you can see the links in your internal machinations. It offers a much larger perspective. And even if there is a feeling of certainty in you, you can keep it while listening to what is asked from you. Then, it’s up to you to dare go from what you know towards what you don’t know.

I remember my first contact with the group: on the website, at that time, there were four questions. The first was: “What have you done so far to end your personal history?” Faced with this question, first I told myself that I had read and tried a few things. But when I looked into myself sincerely, I realized that in reality, I had just scratched the surface because as soon as it got serious, I backed up. So eventually, I was still on the first step of the ladder.

There is also a word not often used but which is important, especially in the beginning. It is “stripping off” or “emptying.” You must take yourself as a bin in which there is a hidden treasure. First, we must learn to remove all the rubbish before accessing the treasure. But don’t be in a hurry either. It’s getting rid of superfluous stuff, pruning. And that sums up well the work to do.
It can go up to questioning all one’s knowledge, all that we think we have already acquired. We don’t say that everything that is acquired is wrong. But it must be challenged. Anyway, what is really true cannot go.

It also allows you to see all aspects of what you know. For example, for me there was the word love. I knew I was living it. But since then, I have been able to associate it with the word aloneness, whereas before, I could not see aloneness as an aspect of love.

The concept of value is something very strong and very sticky too. We’re all very identified with our values. Every society has its values. And these are not the same from one society to another, and yet we defend them firmly, as if it was our blood.

In society, it is very difficult to let go, because we are recognized through our values. I know for myself, it was very difficult when I met people with whom I had always been friends, through these values. So, more recently, when we caught up on each other’s news, I didn’t have much to say. First, I’m not ill, which is unusual at my age. Also I no longer go to the cinema. And it’s really painful to let go of these links. In fact, there are no links to let go of, but inside, you feel like a vegetable, or rather, the fear of being a vegetable. That’s what we need to let go off.

And I remember once when in a group, someone asked me: “And you, what are you doing?” And I hear myself say “I am learning to die,” and the conversations continued. No one seemed to have heard. But in the end, someone came to me and asked me why I had said that and we had an interesting conversation. I would never have thought I’d say such thing in society! And it creates other things. And it creates a great peace because here all the worldly weight disappears.

G. Yes, but that is already well underway. I made big steps. If I am with my new girlfriend, it is because I distanced myself from my old world. So I know this a little.

And here, you fell into the trap of the comparison again. You were not really listening. You compared what she said with you.

You heard, but you were not listening to the message and the intention that was behind the words.

She spoke of what it is to live when we have lost certain values. That was the message. And you jumped to seek a reference in yourself. And you missed the message. She described an example of the self-stripping process, how it happened and what were the results.

This light is a torrent of uncertainty,
it is a blade of the unknown,
it is a sea of destruction.
(Yvan Amar) 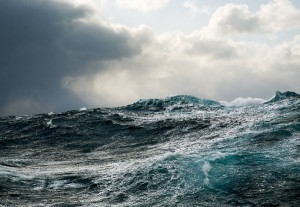