How can one know that what one is living is detachment or indifference?

It seems to me essential to correctly understand this notion because I don’t think I can really be in external considering otherwise. I don’t have the impression of having a sort of internal alarm that indicates to me that in this case I am detached and in this other case, I am indifferent. By contrast, I can feel internally (by contraction most often) when I am attached or identified.

A little personal reflection about the meaning of the words, attachment comes from to attach, to link, to paste, to detach, to untie, to unpaste. Someone who is attached is a prisoner, to untie, to detach oneself, what a relief :). It feels like a liberation, a lightness, a taking height, in detachment. Indifference, indifferent, what is not different, so on the emotional level (for we’re talking of this level) a neutral state, undifferentiated, that touches the notion of insensitivity, something that doesn’t touch me, that lets me indifferent. Actually, if I deal with both on a basis of notion, intellectually, without feeling, there could be a confusion or a doubt for without the feeling to differentiate, both are close, in both cases I can understand that there is no difference between all the events becoming in life, but as I understand it, indifference is a neutral state without feeling, it seems to me like a buffer to not feeling the necessary suffering, or joy, or anything else, a state of indifference where there is insensitivity; whereas detachment, I would say even equanimity there is a nuance, it is the acceptance of what the life brings me and the welcoming of the necessary suffering when there is one, or any other emotion. Am I in equanimity or indifference? Good question, only my feeling, my vigilance in the present moment can indicate where I am and it seems to me that only the entire work on myself can bring me there and deepen this equanimity. For me, the indifference seems to be a neutral state in which there is no listening and no feeling present in the detachment. So actually in the indifference and insensitivity, it is hard, even impossible to be in external considering, it is hard, even impossible to be in the expression of the essential value. It all hangs together finally.

Detachment is the consequence of a conscious state of vigilance and intention to not identify with our emotions; with indifference, no need of vigilance because the emotions are not felt, the person is as if she was anesthetized.

Both attitudes, from the outside, can result in the same thing, but the internal sensation is very different. Indifference, for me, is a defense, so a crispation, even light. Detachment pre-supposes a surrender, and a global attention. Talking with a maritime metaphor, it would be like the difference between building a dyke against the waves, or finding your balance on a surfboard.

I feel indifference like a denial of feeling, a voluntary anesthesia that has a goal to flee the feeling of the moment (in general, flee the necessary suffering, but in fact, all is scrapping). Finally it is like a suicide without physical death. In detachment, I feel all on the contrary, but I hold nothing, it doesn’t stick, I am not identified with the feeling. Then I can live totally in the moment and its surprises; surprises that I can’t live in the indifference.

One is detached from the external/internal things only because we are detached from what we believe them to be. When it crumbles, or when it gradually loses its power, then interests, fears, desires, linked to this lie, diminish. It remains only external or internal events stripped of this sense of identity dynamic, that one welcomes and lets go (participating in it or not, depending on what rises in oneself or not).
Indifference is not a neutral welcoming of the reality but an escape where one cuts oneself from ones feelings. It is a mega buffer, a disavowal of life. There is maybe less suffering, but also less joy and amazement. I think that what can help to differentiate between the two, is the absence of the trace that detachment leaves: the event takes place and goes through oneself simply, obviously and in relaxation. Whereas indifference leaves oneself with a taste of ashes, of something unfinished, a diffuse tension but permanent in the background to maintain this withdrawing of life. The global bodily feeling disturbs the mechanism of indifference.

External considering requires a detachment stripped of identification, projections, judgments and self-pity. This question of discrimination between detachment and indifference, in this process of skinning the dynamic of identification touches the subtleties in the changes that are felt and that send one back to necessary suffering and unnecessary suffering, and to this notion of boringness that some evokes as a feeling of “some kind of sadness”, sadness of a hidden fear to become indifferent, fear of a sort of ordinariness in not being touched anymore, not being moved anymore by the others suffering, to not feel compassion anymore (an attachment to a created belief). As if one could grant oneself to not be in self-pity and always feel pity for the other! On this level, compassion is void of the feeling of pity for unnecessary suffering, but is moved by a kindness touching the sensitivity towards the other by taking into consideration the essential necessary suffering and doing so without any possible concession. Then one can evoke a “freedom of indifference” consisting of the fact of not being submitted to any obligation from personal interest, to allow the expression of what is coming in the moment from the consideration of the other and from the love that is felt.

Indifference (unless it is pure inattention) is external reaction. Mechanical. Detachment is internal action. Conscious.

In moments when I allow/accept all that is happening, exactly as it is happening, with no interference, simply observing it all, I feel the dawning of detachment. I feel a deep freedom. Maybe even, I dare say, love. Not the love of wanting or attachment, but the love of appreciation and acceptance. The moment there is any resistance to something, I experience a dulling/numbing of my awareness and out of that dullness/numbness comes indifference. But really that resistance is the birth of unnecessary suffering and the dullness/indifference is avoiding the unnecessary suffering. 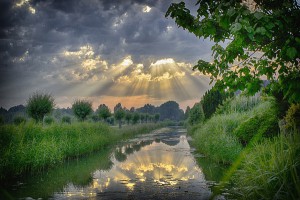