This morning, L., M. and I talked about a half-dead tree. L. mentioned the idea of cutting it down, but as this tree is at the neighbor’s, I said that we should not cut it down, but simply remove the ivy that is blocking it. And actually M. went to cut it down. M. I’d be interested to know what you heard, what you didn’t hear and why?

This morning when you told me about the tree, I immediately pictured the half-dead elm that we had talked about with A-M, the one growing along the post. So I had that image first in my head and it blocked me, I got out of the discussion. Afterwards, while trying to catch the wire, I understood that it had to be cut when only the ivy had to be removed. It was a mental representation that came to disturb me, because I had an image in my head that corresponded to something else.

So you weren’t listening at the time.

I lost listening for a fraction of a second.

That’s right, and that happens to you a lot.

So more physical presence, more body consciousness; and now that you know you can have this kind of interference, stop it right now and keep listening first.

Should I have put a stop sign and asked to go and check on the spot?

I did it but it was too late, I had missed part of the discussion and so I left on my own idea.

If it’s too late you can always ask again, like you just said.
So before you start, make sure it’s really the right thing to do. Especially now that you know you’ve experienced this kind of interference before.

Yesterday, someone pointed out to me that I often interrupted the other person with “yes, yes, okay,” and I realized that I was missing information.

Yes, listening is also letting the other person finish to the end.

I come back to what happened with M. because I detected this same lack of listening in me at times. As I’m very visual, images go much faster than words, and often, indeed, the other person starts to speak, and I have images that come from where the tendency is to cut or finish sentences in his place, so you really have to be vigilant to block that and increase listening. I find it interesting to observe the mechanism or the inner strategy when the images pollute me because they go too fast.

Does this have something to do with the ability to anticipate or is it irrelevant?

One cannot have the faculty of anticipation when one is not listening and obeying.

One must at the same time be attentive, without, however, obscuring this capacity for anticipation, is that what you mean?

No, first of all you must be able to listen and be able to obey what life tells you. This is a prerequisite for the faculty of anticipation, but it has nothing to do with anything concrete here.

If I can rephrase, it is rather that anticipation comes from a very global listening.

It’s a false anticipation then, what I was talking about?

I think it’s important to rephrase and check that the other person has understood what I said.

Yes, but we can’t do it every time, it’s not practical.

I have noticed that often when I have not understood well, I have a doubt, a feeling that it is not clear. In this case it’s worth checking.

If you have a doubt, yes of course, but not systematically. It’s mostly up to people to learn how to listen and to those who talk about monitoring that the other person has listened well.

What I have observed at home, when there are discussions, blah, blah, blah, is that there is a “switch” that is made. Immediately, it switches to total non-listening, but it’s really a survival mechanism for me; I have so much information at the same time that I can’t process it.

I completely understand what you’re saying, but is it clear to you that you can recognize that there is blah, possibly unnecessary, that you can possibly take measures to protect yourself from this blah, and at the same time remain in non-separation? Is that clear to you? I’m asking you this question because I feel like I’m hearing a judgment, and I hear a separation in you when you talk about it.

Yes, and I would put it another way: accepting the necessary suffering that it brings you at that moment.

Blah blah, it can be several people talking at the same time and it gets confusing, or it can be when the discussion drifts and goes in all directions. When that happens, you can totally reframe the people who are telling their stories, to “what’s the message, what’s the news?” You can ask the other one about that.

What he says can only work when we have first welcomed the necessary suffering, otherwise we add blabla to the blabla. If we try it while being separated, it can’t work. The priority is to welcome the discomfort it brings you.

This morning I began to welcome the necessary suffering in relation to obedience, the subject we talked about yesterday. I remained in body consciousness, in obedience, without trying each time to look for little tricks to dodge, and I noticed that I was more at peace with myself and also in my relationship with others.

I can tell you that since the beginning of the week there has been a progression in your ability to do, in the relationship, in the absence or decrease in reactivity. Seen from the outside it’s very clear.

Little by little, as your body awareness increases, there are things that become valid, that become easier to do, that become part of your experience, that become natural. And it is a vigilance of each moment that must be constantly renewed, with the welcoming of the necessary suffering in addition.

And you, S., do you have anything to add?

Yes, on a facet of listening and obedience that we have not yet touched on. We often talk about listening to others, but there is also listening within ourselves to the impulses that go through us and to which we sometimes do not obey out of comfort, out of security, and this listening is just as important.

And for me, when we speak of anticipation, that is exactly what it is, we must first have this complete and global listening so that this faculty can express itself.

This allows us to distinguish between the impulses that come from the personality, always in search of a very precise objective, and what arises spontaneously, what life dictates to us in a certain way.

It is like being in the desert. At first you listen to the absence of sounds and call it silence.
Then suddenly you may be taken by the presence of stillness where you are one with listening itself.
(Jean Klein) 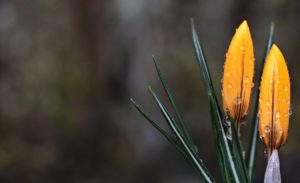