I was really good at procrastinating. And it blew up in my face!

Is it completely over now?

Let’s say that I have it on leash. But there are things I don’t do right away.

Yes, but it’s not necessarily from procrastination. It depends on the context. For me, often, it comes up and I know that I must do it now. How do you manage to deal with the procrastination of others?

Sometimes I just do what the other person was supposed to do for them. And sometimes, I welcome the necessary suffering.

Objectively, it is useless suffering for all the victims of someone’s procrastination, but we have no other choice than welcoming it as necessary suffering.

And sometimes I step out of the way to let the other do it. Or I drop the whole thing.

For me it is still a subject (that I haven’t reached completely).

You really need to get to zero procrastination.

Not to wait for reminders anymore to do what has to be done and reminding the others if I expect something. I realize what non-procrastination does to me. It adds to body consciousness and transmission, and it is linked with what was said about real life. In fact, I realize that I can become a pain in the ass for someone who procrastinates! But also that I grow in my own certainty. Eventually I realize that it’s going to annoy the other, so it generates some necessary suffering in me.

There is something similar: it is the lack of precision in requests of others. It also generates some necessary suffering.

Yes, this is what happens with most people. When I receive a request, I expect it to be incomplete or erroneous, and if it is all there, I take it as a gift.

In my experience, I only needed three days to feel the benefits of the strength of not procrastinating.

Procrastination works like a drug. It makes you feel good. The pleasant sense of joy and freedom that initially come with procrastination seep into the nervous system. The decision to procrastinate creates cracks in the foundation, and the joy of the abdication of responsibility seeps into the cracks and replaces body consciousness.

Personally, I would not speak of strength, but no longer procrastinating brings energy, vibration, with the satisfaction of having done what had to be done. And for the organization, I got a little notebook where I list the things to do, and I scratch off what’s done. But the most important, it is the energy and joy.

The quality of rest is different too.

I observe that I still pay for the effects of procrastination from the past, since I was a teenager.

In fact, the shit smells the same, whether it is something new or a residue of the past. It is just that you’ve much more because there are all the residues of the past to take care of.

Sometimes I have the impression of bothering the other and having to ask many times the same thing, day after day.

It’s the same thing we shared earlier, in a different context by speaking of reminding others. To annoy the other is a necessary suffering.

The key point with procrastination is the avoidance of necessary suffering.

It seems that there is some impatience in my procrastination. In impatience, there are hidden expectations.

There is something that I spotted: in certain situations, instead of welcoming necessary suffering, we’re considering all possible hypotheses. For example, when one waits for a train that doesn’t come.

It’s true that I look at all the possibilities that appear, but I don’t create them. This is not from the mind.

But yes, it is from the mind. It is imagination. Don’t you feel more alive when you’re in the imagination?

Yes. And there is a belief that if I don’t do that, I’ll be a vegetable.

So there, you lose body consciousness. It’s obvious. Now, try to see what happens when you stop this process. Staying in body consciousness, welcome the necessary suffering, and from there, you’ll see what happens. Before, there was anger in you. Now you made a first step in not going into it, but you didn’t go until the end. You take refuge in fantasy. Now stop this and remain in the “I don’t know.” 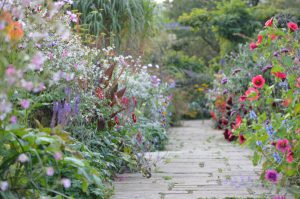