Stephen Jourdain said: “never lie to yourself”, I would like to understand what it means really. Each time L. refers to sincerity, I’m wondering what she is talking about. And you, what does it mean to you?

It speaks to me thus: lying to oneself is a mental gesture, a particular sort of buffer, it involves hiding from necessary suffering. Over time, if you observe it, you will come to recognize a certain unmistakable bad odor. Sincerity is the antidote. Sincerity is deeper, older, wiser, more relaxed. Sincerity recognizes self-deception by the separation that it creates, the childish emotion of fear that it contains. Self-deception is more often than not the maintenance of a flattering image of oneself.

For me, it’s the desire, then the decision and the commitment, to go and see the root of what I do or do not, say or say not. And for this, I have some tools: awareness of “personal interest, internal consideration, avoidance.” And when it is not clear, shine the spotlight on the question, over and over, until it becomes clear.

Lying to myself occurs when I know the right thing to do, but I don’t do it and instead tell myself my decision was justified “because…” A certain degree of consciousness (self-remembrance) is necessary to see through the false justifications; in complete sleep the lies are not challenged. Lying to myself is saying “no” to the invitation to remember myself, and thereby deserting true being.

Sincerity, is saying “I don’t know” when I don’t know, rather than answer to pretend we know. Sincerity, is feeling my lack of ability or my lack of courage when I’m having difficulties rather than make excuses: “I’m a good guy, almost perfect, but here, I didn’t have a chance, and it was not a good day, that’s not fair.” Sincerity, is daring to say that I feel hurt rather than attack the other in response to a criticism. Sincerity, is accepting my humanity and my limits, rather than going all out to hide it to others and myself. Sincerity has nothing to do with telling the truth to the others. On the contrary, there are times where, to be sincere with yourself, you must lie to others. Sincerity, is the absence of lag between what is and what I live. At any time, the ego based desire to deny a fragment of what “is” because I have a judgment. I have to remain vigilant in my acceptance of what “is” to avoid such judgements taking root. Sincerity is another facet of welcome-acceptance.

L.’s words of sincerity made a very strong impact on, me as well, when I heard her speak of it several years ago. For myself I discovered that sincerity is a living vibration within myself, as real as an itch on my skin, possibly a genuine emotion, though I am not worried about defining it. When I am centered in sincerity, lying falls away effortlessly as it has no place, like darkness in a well-lit room. All the motivations for lying vanish. Lying is a consequence of the incongruities of the personality, if there is personality, there will be lies as the personality is built on the lie of original belief and must lie to support its existence. My only effort is in remembering.

For me, sincerity means that when there is identification there is lying. When I am in identity, there is lying, it is a passive lie. Because living in unconsciousness, I can recognize the lie as it happens. It is only when I leave it or detach from it, that I can see it for what it is. Therefore, the importance of being vigilant not to let the lie/identification smother me to the point of not remembering myself. Where there is total identification there is not self-remembering, there is no self, there is nothing but lies. Nothing more than a personality that moves like a puppet who believes itself to be a free and independent operator of the body, without seeing the transparent strings that guide. To summarize, I can say, personality (or false personality if you want) = lie/original belief, personal interest. Identification = belief in its own lies. Sincerity = seeing that lies are only lies/detachment/non-identification. End of lie = essence, self-remembering, expression of the essential value.

Sincerity is to say yes. Yes to life, to all that life brings to us, positive or negative things, without reservation. Only this profound sincerity would require me to express doubt should it arise, beyond all judgement, personal interest, without fears and without compromise(s). There is a characteristic of life that is beyond our personal selves, and it is common to everyone. It is the aspect of life that is the awareness of non-separation. This awareness is the fundamental reality of life. What it means to subjectively live this awareness cannot be directly expressed or understood. However, it can be indirectly expressed by denouncing what is not true to it.

Therefore, we must unequivocally denounce the personal lie. To accept lying to oneself is to forget, and thus to alienate oneself from what is real. That means separating ourselves from the truth of what we are at our most fundamental level. It is to voluntarily deny the reality of the aliveness that flows through us and animates us. It is cowardice, it is a betrayal, it is to flee from our primary responsibility.

“Our realness” is based on the degree of the sincerity of our commitment to serve the “IS-ness” of life. We serve through our being, as it expresses the action of our service. In this way we serve the richness of the boundless joy that binds us to the universal point. It is that point which opens to an infinite space encompassing the very essence that is born in the core of our being. It is emptiness, void of emptiness; invisible, always present. At the heart of its essence, is a yearning to resonate with the sound of an appearance in time in space, in the shared joy of unity.

So for me there are two things: not lying to oneself, is not falling into the masquerade and never forgetting who I really am. Play the game, yes, fully, and with joy and love, but never forgetting that it is a game. When I speak of a game, that means the game of human society as we all live it in our daily existence. This means: staying in contact with my essential value all the time.

What comes to me immediately and in an obvious and very strong way, is the feeling of lightness, cleanliness, calm, void, but void that involves space. Conversely, when I am reluctant to to recognize or tell myself where it hurts, the discomfort can last a long time; actually it’s procrastination, but sometimes I need time. Time to calm myself and identify what I am hiding, and then when I allow complete sincerity, it puts me in a state that looks and feels like my essential value.

I add the following to what has been written on sincerity:

– Recognizing each time they occur, our errors and imperfections.

– Regret (necessary suffering) without blame (to forgive at the level of the emotional center) rather than (self) justifying.

– Indispensable that you affirm a personal vow to see the Work through, all the way until you reach the end of yourself.

– Essential to fully live your essential value (in action).

– Lying to oneself is a buffer to avoid welcoming necessary suffering.

Remorse: it is the pain of not being sincere, to have done or not done, said or not said due to self-interest, internal consideration, or having declined the invitation of self-remembering. Not having been true to the jewel that I know I am, which can bring about useful and necessary suffering; whereas in guilt, there is complaining, moaning; there is a kind of suffering that sticks to my skin, there is no possible way to step back. I learn nothing because it guilt refers to justification, the other person, circumstances. 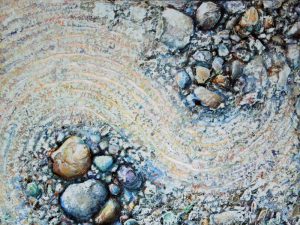