Someone used the term “impersonal”. Can we talk about that more?

When I’m in body consciousness, there is a structure called G., but there is nobody inside. It’s like a shadow.

As in an envelope? There’s nothing in it?

Not nothing, but 99% vacuum. Another way of saying this is that at some point, I’m no longer there. There is action, but not the belonging. This is not empty, because there is a specificity that makes that the action that I’ll do, has a tint, but it’s not me. I use “I” because there is no other word. It is difficult to express it, it is a sensation.

When you look in the mirror, you see yourself or not?

I see a body that looks at me.

When I look at myself, there is a feeling of strangeness.

Are we talking about dis-identification?

That reminds me that when I do certain actions, it is done. I do not care how this is done.

It’s like with body consciousness, when you’re in, you do not realize, like a fish in water. It’s the same when you intervene, it passes through you, but it’s not premeditated, and it’s sometimes surprising. But also very relaxing.

Because there is no tension, no doubt.

Is it that being in body consciousness, makes you into an impersonal person?

There is one thing that goes with it, it is that the internal states are no longer important.

When we navigate through life as an impersonal person, it’s a little unreal.

Speaking of an impersonal person is already too much, because there are only actions.

Then, an impersonal non-person 😉

In daily life, when there is no issue, I do not feel the outline if myself, I float. And when it is associated with a responsibility, then there is a sort of contour.

Can we say then, that we are alone with oneself?

Rather alone with no-one!

In the impersonal, we are getting closer to the baby’s perception.

The eye by which I see God is the same as the eye by which God sees me.
My eye and God's eye are one and the same-one in seeing, one in knowing, and one in loving.
(Meister Eckhart) 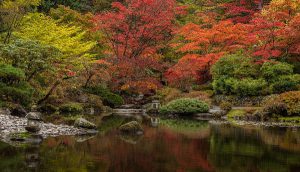