There are times when commitment weakens and that is when you have to be very careful. When you fall asleep, you don’t realize it, and if you don’t keep in the background the idea that you had committed yourself at one point, if you forget that too, then the forgetting becomes serious, sometimes even total. It is clear that commitment coupled with an existential decision cannot guarantee anything in the long run, so we cannot count on it.
S. experienced something similar a few months ago.

What was your contact with your commitment during this period?

I had the impression that no matter how hard I tried, nothing worked any more, that I was in a deadlock. So I started to question my presence in the group.

And what about your commitment to yourself?

A kind of despair: nothing is possible anymore, I did everything and it doesn’t work.

Yet I warn you regularly that this can happen, didn’t you think of it?

No. There was almost some kind of comfort in giving up. It is true that at that time I had completely lost the connection with my commitment.

It happened to me, too! And systematically when it started to flicker, a phrase from W. came back to me: “the day you start to find good reasons not to come, that’s when it’s dangerous.” It clearly worked as a reminder. And each time it allowed me to react, I sometimes phoned him, anyway I did something.

As far as I am concerned, I first said to myself that I wouldn’t even talk about it in a group. I just wanted to come over, and if nothing happened, I’d break. But when I arrived here, I understood that I needed courage, that I had to talk about it, that I had to put it on the table. It didn’t matter what happened next, but we had to talk about it. And for me it was a bit like the last card to knock down, it was about sincerity towards myself. It was the last thing I could do: be sincere with me, and therefore with you! And the only thread that I had left was in relation to my sincerity. The crazy thing is that then you just answered me, and immediately it all dissolved, and the commitment resumed as vigorously as before.

Indeed, there may be times when the mind begins to send its little suggestions and then the landscape suddenly becomes obscured up to total confusion. But with experience, I know right away that it’s bullshit, and it even makes me laugh!

Yeah, but what I’ve been going through lately was beyond that. Seeing the assaults of identity, the innumerable thoughts, I think it’s a good sign. Feeling fear? Yeah, identity is scared and doesn’t want to go. So at least I could hold on to that! But by that time, I had reached complete powerlessness! In what you share, we still perceive commitment in the background. While I almost didn’t feel it anymore.

When you fall asleep, you don’t realize it.

Yes, for me too.
As far as I’m concerned, every time I was confused I called in a friend. And I wonder how it’s possible to leave without talking about it at all, not even as an individual to anyone in the group, assuming it’s too hard to go to W. or approach him in a meeting? How is that possible?

But it doesn’t take that much. Isn’t there some falsehood that comes in to stop you from talking about it?

First of all, you must avoid procrastination. Every time you procrastinate, it gets easier not to do it. There are a lot of conditions in this case.

The term “falling asleep” is really important. There was a period in the group where it was very hollow, we had the impression that nothing was going on, it looked like dull. In these moments, motivation can drop, because you’ve been used to something going on, but there are times when it’s much slower or subtler, and you may feel like nothing’s going on. I wondered why I kept coming here. And what helped me a lot at the time was to say to myself: “Whether I have a good reason or not to come, I have to come anyway.” In fact, lack of motivation is not a good reason!

Exactly, it can’t come from motivation.

And that’s where sometimes we fall asleep and gradually get anaesthetized. After a while, we lose all motivation: what’s the point of going there? This is really a trap!

At that time, probably you or the group were in an interval.

Yes, I was clearly in an interval, a E-F where I tended to reject everything outright, thinking that for ten years of working on me nothing had changed. And it was my wife who told me that she saw some very positive changes in me. That’s why the call to a friend (to cross the E-F) isn’t always where you think it is!

In any journey, there must be a crossing of the desert, it is inevitable! You have to know it, it will help.

And an oasis from time to time!

For thirty years I sought God. But when I looked carefully I found that in reality God was the seeker and I the sought.
Bistami 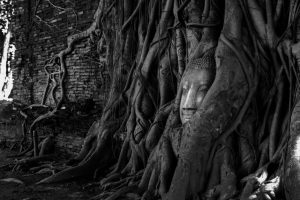